Ayurveda was developed in India about 4,000 years ago and is one of the oldest documented health care systems. It is a “life-science,” emphasizing health by integrating ayurvedic herbal supplements, diet, exercise, massage and life style. In Sanskrit (the equivalent language to Latin in India) the word Ayurveda literally means science of life (Ayur=life, Veda=science).

Ayurvedic philosophy indicates that everything in the universe is made up of 5 elements; fire, air, water, earth and space. Air represents all that is gaseous, earth represents matter that is solid, all liquids are represented by water, fire represents any matter that can transform. Space represents the element in which the other 4 exist.

In our bodies, as in nature, these 5 elements co-exist in a way that is by and large harmonious and where no one element dominates another perpetually. For this harmony to exist, there has to be a force that manages a relationship between the elements of nature. In paired relationships, the forces guiding them are called the Doshas.  The Doshas represent the “subtle energy” that combines and balances the characteristics of the two elements it influences. This force has to often combine and balance seemingly contrary forces such as Fire and Water under Pitta. Vata manages the relationship between air and space while Kapha brings water and earth together. In addition to our bodies, everything around us has these Doshas; plants, pets, fruits, vegetables can all be classified using the same principle. 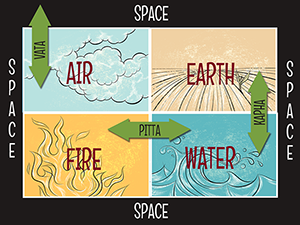 In our bodies Vata is the force behind movement; hence anything that moves or helps create movement is the responsibility of Vata. Pitta is responsible for digestion and metabolism; taking the food we eat and transforming it into their most basic form for absorption by the entire body as nutrients. Kapha is responsible for the fluids that act as the lubrication for movement of the joints, as the glue that helps hold things together, as the canals to transport nutrients in and toxins out.

Every individual needs all three Doshas to exist since they each play a role in our body (and mind). We normally exhibit greater characteristics of 1 or 2 of the Doshas.This unique combination of Doshas defines the person’s unique body type (or Dosha).

The combinations could be Vata/Pitta, Vata/Kapha, Pitta/Kapha; for a total of 6 different combinations of these Doshas. Most people are a combination of two, with one being dominant. Although it is possible but unusual to have all three in equal proportions; or to be completely one Dosha. This combination of our Dosha known as Prakruti, is determined at birth and remains constant, by and large throughout the lifetime. When at their natural state of balance, our Doshas provide the strength our bodies need to prevent the conditions that may allow disease. When out of balance, the body’s loss of homeostasis permits health conditions and diseases to develop. You can learn more about each Dosha by visiting the pages for Vata,Pitta and Kapha.

Doshas, Our Body and Disease

When the natural proportion, or balance of our Doshas is disrupted, illness can occur. Our Doshas can go out of balance due to toxin accumulation, stress, improper diet, over-indulgence and even the weather. Ayurvedic medicine’s philosophy emphasizes moderation rather than denial. We can be healthy by practising moderation within the realms of our Dosha (body type). Remember that denial can be just as unhealthy as over-indulgence.

Our dominant Doshas will determine the imbalances we are prone to. Vata predominance when imbalanced, will experience conditions relating movement or of parts that help move us around. Pitta imbalances will lead to disruptions of metabolic and digestive systems and also lead to inflammatory diseases. Kapha imbalances lead to obesity and related conditions; fluid retentions, pneumonia, etc.

Here is a short video about Ayurveda – with Amber Vitse